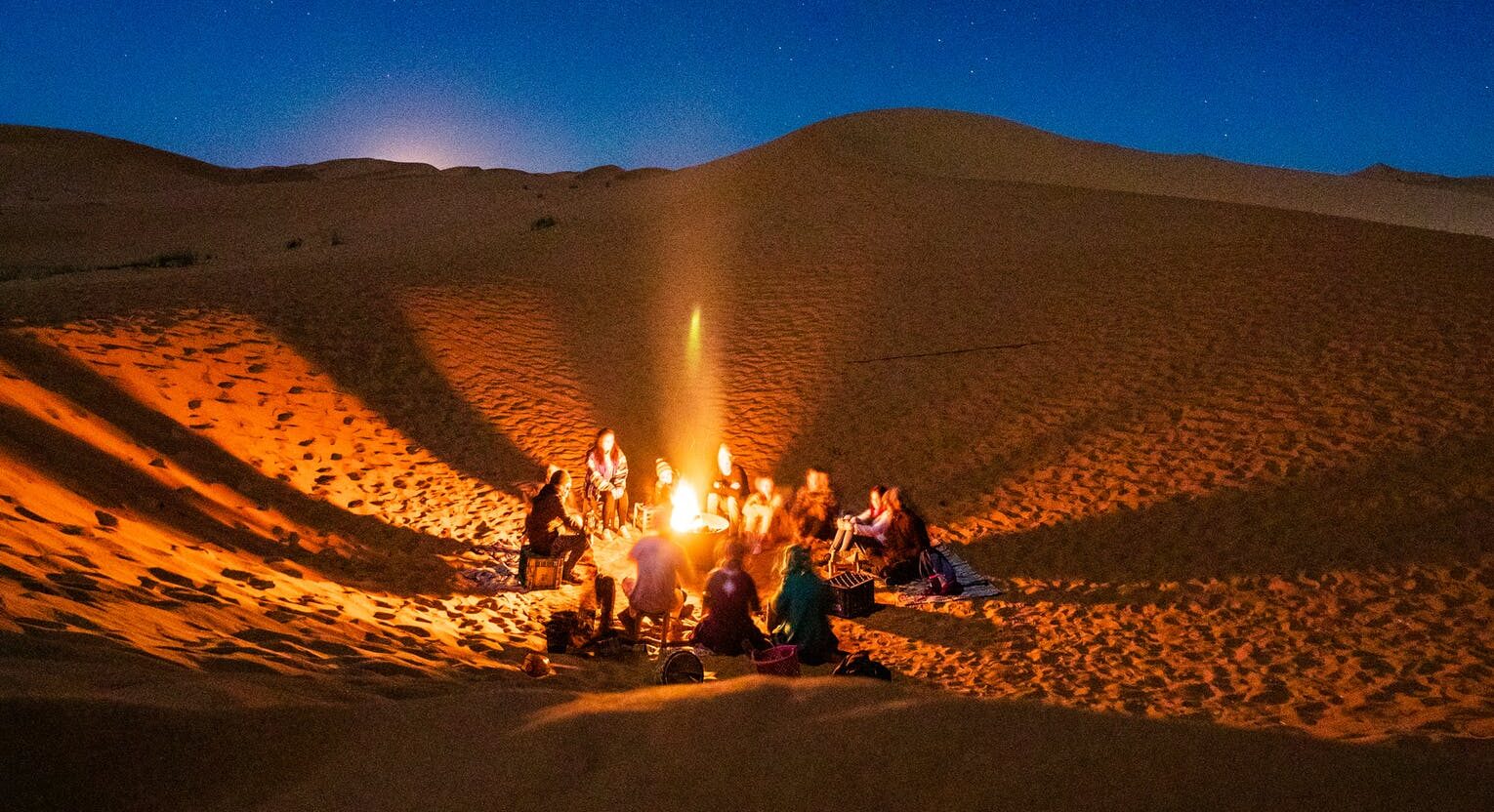 The Exploitative Nature of Tribalism + Comfort

[…] It is vital to always look for shared overlap among external legacies and one’s own civility instead of focusing on the need for defense.

The Utility of Tribalism

We have no claws. We have no carapace. We have no venom. If we tried to operate without a community (which includes the tools that society has collectively given us) the life expectancy would be about a week. The world is not your sandbox there for your disposal, but an environment in which you are potential food.

But we DO have complex thoughts and a flawed language to communicate them. We DO synthesize collective ideas and misunderstandings to create tools. We depend on this collaboration to survive. We also depend on the group numbers to ensure individual safety. It has served us well.

But this brings with it the need for cohesion. When paired with the threat of overpopulation when resources are scarce, there is both the motivation and excuse to exclude the “odd” or “non-conforming”. Humanity has evolved to depend on tribes to keep us safe from nature and other groups (so much so that often we conflate the two).

To ensure that the privilege of being included – as opposed to being given a death sentence through exilement – is justified, a ranking of people is required. Whether intentional or ignorant, the contrast of our own individual identity with that of the group is how this ranking occurs.  Elders ensure that this identity stays consistent and those that don’t contrast it are promoted more than others.

So from the standpoint of evolution, the origin of exclusionary tribes makes sense. But it should be noted again that the segregation within this presentation is only justified for two reasons: scarce resources and the real and present threat of nature. Without either of these, the need for exclusion falls apart.

Justification is needed to exclude others. Fear is needed for community acceptance of the narrative.

Unfortunately, until capitalist realism – the cultural acceptance that society necessitates capitalism (paraphrased) – is rejected, the false scarcity of resources wage exploitation necessitates will never be undone. So as long as we fear nature then the exclusion will continue. But this is a bit of a problem since we have created well fortified towns.

Inherent bigotry has worked around this as we have already alluded to: people can be dehumanized to make them part of the “natural threat”. In this sense, tribalism is self perpetuating: we need the tribe to protect us from “others”, and they are “others” because they aren’t part of the tribe.

This is of course – literally – indefensible and – given the chance – people will challenge it since their personal experiences will often mismatch the story being presented. To counteract this, it is in the interest of tribal perpetuation to hyperbolize how dangerous the threat of the “other” is. This ensures that the tribe is hesitant to interact with them and will doubt anyone that claims they are worth considering.

This can be seen time and again in the framing of conservative media (giving it the proper name of “reactionary”) and less often in main stream media: protests are “riots”, sex education is termed “pedophilic”, immigrants are “job stealers” or “parasites” (all of these are counter to the statistical findings).

At this point I would like to explicitly point out that the discussion has referenced “tribes” with intentional vagueness. This is not strictly a social phenomenon. This applies to almost all forms of community interactions. A few examples are religion, economics, philosophies, and obviously politics. The idea of “resources” relating to many of these are hard to identify, but abstract concepts like “salvation” or “freedom” are often invoked. Many at this point can say “but those aren’t actually real” and to that I only offer the following:

It doesn’t matter if they are real if people believe in them.

And this is important. We all have myths we believe to be undeniable facts even if we can’t know them. We have no reason to doubt the reality that fits our world view, so – with all our practical justification – we don’t. We accept social myths until there is reason not to, and – for many who are comfortable – applying doubt is a threat.

So this is the perfect storm that current society presents us with: we are evolutionarily primed to depend on tribalism when desperate, we conflate reality and narrative, comfortable people have more opportunity to influence others, and comfortable people do not want to lose their comfort. This leads to only one conclusion that I can see: comfortable and influential people are constructing narratives claiming all other identities are inferior to their own and pushing it to their audience.

And who is more influential than those that can purchase advertising?

Most corporation’s (use that as vaguely as you want) identity isn’t threatened by “competition”. In fact, often it promotes them because it is creating more of a dependence on the service that they provide. It is only after people become dependent on them without the ability to act with sovereignty does a monopoly really matter. And often the “competition” is mutually beneficial to shield both tribes against the accusation that they are authoritarian.

In the end, both workers and consumers alike lose in this tribalistic economic mindset. And what’s more, we defend it because we often see no other option. If you are willing to risk depression, you can see how this is affecting you by asking yourself “why do I shop at my favorite store?”  Fun fact though: Target and Walmart can both be bad at the same time… even if those are the only two stores in your area to work/shop at.

So we live in tribes. Everyone in the tribe is primed to fear/dislike those that are a threat to the tribal identity. We are then faced with a choice: conform to and be exploited by the tribal identity or – alternatively – become an “enemy of the state” and challenge that which has been prescribed to us.

Or at least that is easy to believe.

We don’t have to choose one extreme or the other. Not every tribal tradition is harmful, but when we are indoctrinated into them it is hard to know which is which. The answer is to challenge the traditions when they empower some people over others. While this will inherently accrue backlash, the deconstruction of unjust dogmatism will not harm anyone (unless you believe taking away excess comfort is harmful).

All that said, there is a utility in the “wisdom of the crowd”. There are natural threats to be taken seriously, and when those threats cannot engage in dialogue (e.g. harmful foods, dangerous insects, foreign tribes) it is appropriate to show restraint. It is also the reason that education promoting tribal pride and discouraging the understanding of foreign worldviews is severely problematic.

So that’s it? Expect each and every person to give up the safety and security of their tribe so that we can risk the inclusion of possible hostile forces? The practical paradox should be apparent. For this reason, the individuals that appeal to tribalism aren’t to blame. Instead it is the tribal identity itself.

But – as already stated – tribal identity and genuine protection is often conflated. Identifying the difference between the two is necessary. In general this is done by deconstructing the values of the tribe to see where it aligns and contrasts with what is being presented by others. Looking at statistics to see the general consensus (especially those produced in other “tribes”) can represent a more accurate narrative than what anecdotes alone will show.

Ideally the reports and anecdotes will align with the tribal narrative to indicate that the identity is not misrepresenting the practical experience of others, and we all WANT to believe this. It is easier to be in denial than to admit that you are indoctrinated after all. But the possibility of our own indoctrination must always be a consideration. Similar to insanity – you should start worrying when you stop questioning your own “correctness”.

In general, if your experience contradicts the experience of others, a higher authority (3rd party statistics) must be appealed to. It is also why having a wide range of personal experience with other tribes is necessary to realize the differences between the tribal identity and what is universally accepted.

We may not be able to escape the exploitation that tribalism brings. And being that the exploitation is often an equilibrium of the tribe (and not just a promotion of the tribal identity), this can be good. It creates the moral framework that pulls people together and gives the much desired validity to everyone included. But we have to push this.

Reaching outside the safety of our own shelter is frightening. And those wanting to stay inside the shelter with us will reinforce this fear. But only by facing the terrors of the night can you find the night time friends that you will miss otherwise and report them back to our loved ones.

I know this is a metaphor but look at this… why would you want to miss out on this?

You wouldn’t. This little guy is adorable. There are also other adorable things you are missing by not leaving your tribe.

Challenge yourself.  Leave your tribe (at least temporarily).

4 thoughts on “The Exploitative Nature of Tribalism + Comfort”