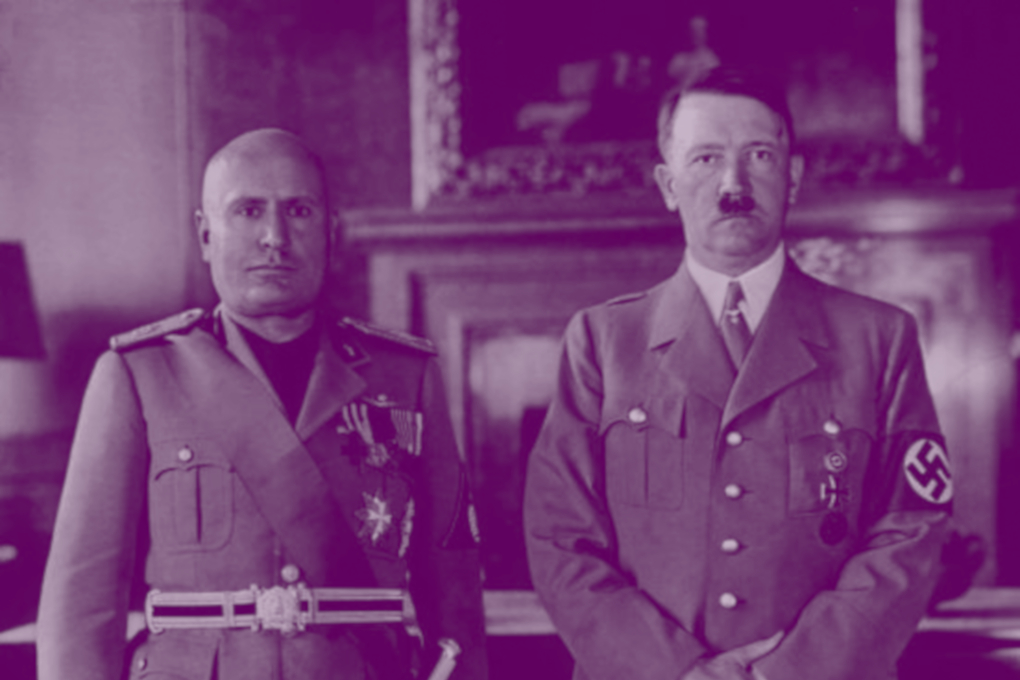 Perception, Fascism, and the Color Purple

For anyone unable to actualize the conflicting mythological differences (either due to community cohesion or existential answers) it will be impossible to partition them from their relative truth.

The historic events within a fascist government can only be denied and excused by those sympathetic to the ideology. By conflating national identity as synonymous with homogeneous assimilation, citizens that were abnormal were forced – when they could – to hide and abandon what made them unique. When they couldn’t assimilate they were treated as subhuman parasites of society.

We saw how this mindset played out: conspiracy, hate, dictators, suffering, supremacy. While not unique in the harm that was caused (neither in quantity nor malice), events such as the Holocaust and dictatorial expanse and occupations stand out as a prime example of the worst of what humanity has to politically offer. There is nothing redeemable here, and as such, it needs to be avoided in the future.

Yes, all of what is said here is factually true. Fascism must be avoided. These atrocities must never be repeated. The world cannot afford it.

Thus, “we must not forget” became an idealistic sentiment to keep us from allowing these events to reoccur. Why doesn’t the reminder work then? From the Rwandan Massacre in 1994 to current atrocities such as the Uyghurs, Gaza, or the all the complexities of the term migrants; the demonization and mistreatment of people since WWII has been abundant. So why are these actions not discussed with the same breath as the National Fascist Party or Third Reich?

Well they weren’t performed under fascism. These are not comparable because these aren’t those atrocities. We didn’t forget, this is just different.

To understand, we must look at what is factually going on. For example: the Nazis were acting on conspiracy theories and propaganda to demonize people. These other examples aren’t “evil” like the Nazis were, since they were justified. It’s like comparing yellow to purple. Sure, both are colors, but they have a different wavelength and we perceive them differently for that reason. There is utility in not lumping everything together: the nuance helps us paint a more clear picture.

Regardless of the utility, there are those that cannot be swayed to seeing any difference. To show why, consider those that are color blind. The “long” cone for most people peaks somewhere around 570 nm (which is a yellow-orange). If these cones offer less of a contrast to the “medium” cone, then some “deeper reds” (which are at about 700 nm) will appear more “orange” without the color blind person being aware of the missing colors. More information can be found here. The point is, many people are politically colorblind. The contrast they see between a (purple) fascist ideology and other (yellow) authoritarian ideologies is deluded.

But there is a material reality in which these are different.

Except that there is no wavelength for purple.  It isn’t in the rainbow.

Where is this color

The truth is our brain fills in a gap for color when it doesn’t have anything else. We make it up.

Purple is in the realm of “impossible colors”. When it comes right down to it, the entirety of our perception of the world is our brains trying to make sense of all the chaos that it has to work with.  Purple is when our “long” and “short” cones are more activate than the “middle”.

This entire phenomena of “impossible colors” is incredibly interesting and worth looking into, but – for now – it is enough to say purple is both real and made up. Understanding the threat of fascism is to perceive purple: we need to consume the raw data and see it for what it is, but that alone isn’t enough – there is a gap to fill in.  The threat is what causes it.

No one alone can understand reality as it exists in its totality. To say it with a bit of flair: no one can know the mind of God. This applies to everyone: priests, celebrities, politicians, the suppressed; everyone is limited.  Everyone is colorblind. Fascism – at its core – is a problem because it is the institutional embracing of this “colorblindness”.

On a personally unrelated note, I find this humorous since “being colorblind” is a current desire for those opposed to the “critical race theory” strawman of political pop culture.

Back on point: We are tempted to look at the practical description of fascism (as I presented in the first section) as the fullness of what we need to avoid. But that is a historic fact. It is the color spectrum of the “real” colors that doesn’t contain purple. It is a fear of something that will no longer – that cannot – occur. The point of “never forgetting” is to stop restricting fascism to “purple” alone. That is just as much a fiction as it is a fact. Atrocities can always reoccur with “justification” everywhere people are intentionally or limited to being colorblind.

We need to not only acknowledge that purple is both real and fictional, but also the multitude of other impossible colors that you likely are unaware of (my favorite is “stygian blue” which is more saturated than black).

If I may, I would like to suggest we normalize the use of “micro-fascism”. This would not be intended as a hyperbolic critique of others, but a realistic critique that all people are colorblind. It is a reference to any action that someone may believe to align with “goodness” or “civility”, but an action others cannot abide by and therefore causes harm. It is inevitable that we all do this. It is also not something anyone should defend when it is pointed out. Defending this – institutionalizing this – leads to actual fascism and the dehumanization of others.

A clear example of this is when a person says “the poor are lazy”. They do so because the desire system in which everyone can succeed by their own will. By claiming the poor deserve it, they are appealing to their colorblind version of what is “good”… one that many impoverished or unhoused cannot abide by.

Since we all have blind spots, then will [micro-]fascism always be with us?

Unfortunately, yes. But that doesn’t mean we have to be complacent on this understanding and become conservative about it. The whole point of this article is to give credit to the unknown; to show there is more than just our limited world view. We must promote others who are not being heard.

As a side note I would like to shout out to all those struggling with no means of getting a platform (and with their own specific impossible colors that others cannot experience due to colorblindness). Specifically in regards to Black History Month: for everyone in that community, congratulations on the progress that has been made, the realizations of how much influence has come from your community, how much we depend on it. This generalizes to all other communities as well and lets NONE OF US pretend that the fight for equality is done.

This is the strength of democracy (when it works). The ability to amplify the voices of the unheard and force it on those that don’t want to or don’t care to hear it. It seems that – currently – democracy seems to be stagnating to allow the majority that are comfortable to dictate the voices heard. Society at large seems to be settling on the belief that we are in no way colorblind.

One could look at this piece as a form of fascist apologia: an attempt to normalize the wrong actions of the past so as to excuse them. To those I say: “you missed the point”.  Yes, we all engage in micro-fascism, BUT THAT IS NOT EXCUSABLE. WE NEED TO BE BETTER.

That to me has always been the appeal to socialism and its ideological brethren. It is a promotion of a better world (one that has yet to exist). Not having “real world” examples of this doesn’t make it less meaningful, but more. These are the “impossible colors” we need to seek out. If we work at it we can see the possibility of it existing, we can make it real. An egalitarian future will always exist in the empty space of reality yet to be experienced. And that’s ok.

work not to be colorblind: We all have blindspots that we need to acknowledge. But we can’t do that on our own. We need to look to others to see what we are missing.

purple is not real, but it has utility: Identify and understand that even though we see colors they are not materially real. Similarly, just because something is fiction doesn’t mean it doesn’t have utility. Fascism is a threat to learn from even if we only demonize a limited form of it, it will immortalize it for things to look out for (as long as we can understand and adapt our perception of it).

get interested in impossible colors: There is a world of experiences that we will never be able to comprehend. Everyone is reacting to their own world (be it real or not) and oftentimes we are talking past each other because we haven’t or can’t see the impossible colors of each other.

One thought on “Perception, Fascism, and the Color Purple”